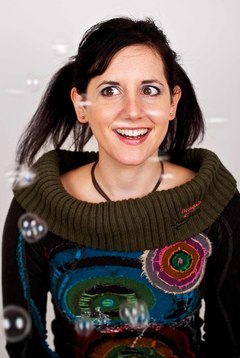 ​Alice Frick, an award winning stand up comedian from Austria and Funny Women Finalist 2012,  is the creator, producer and MC of Laughing Labia and the co-host of the Laughing Labia podcast. She started her comedy career in Austria in 2006 where she performed on stages in Austria and Germany as well as on several TV shows. After performing in Los Angeles (e.g. Hollywood Improv, Comedy Store), she moved to London in 2011 and is a regular performer on the comedy circuit as well as the Edinburgh Fringe Festival. 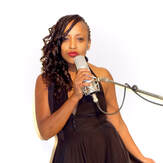 Njambi McGrath came on board in 2021 to produce a Laughing Labia special with for Nextup Comedy.

Njambi, comedian, writer and producer, is a fresh voice with an African perspective. Since her debut in 2010, Njambi McGrath has written and performed 6 Edinburgh shows, has three comedy specials on NextUp and other platforms. She was shortlisted for the BBC Radio New Comedy Awards and guested shows like Saturday Live BBC Radio, featured on STV, French TV (Business Africa/Initiative Africa) and Bloomberg Africa TV, Nigerian TV.  Before coming on board, Njambi has been performing, promoting and producing shows for several years. Njambi has been fighting inequality on comedy stages both nationally and internationally.

www.njambimcgrathcomedy.co.uk
Lauren Karl, co-creater of Laughing Labia. Lauren came up with the name of the show and helped to kick off the show in London Soho in 2012/13. She is an award-winning burlesque and drag king performer and regularly appears as a guest performer at the show.

​www.laurenkarl.com
Catherine Allin, co-producer and co-host of the Laughing Labia podcast during the fifth season. Catherine is a singer-songwriter, based in London.
​
​www.catherineallin.co.uk