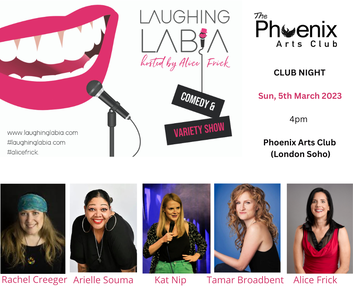 Laughing Labia is back very soon for our monthly show.... with even more funny women. Starting on Sunday, 6th February 2022, 7:30 @ The Phoenix Arts Club., we will be back every first Sunday of the month.

This month with a fantastic guest MC:
​Kate Smurthwaite, not only an award-winning, brilliant comedian but also a political activist. She has appeared on British television and radio as a pundit, offering opinion and comment on subjects ranging from politics to religion. Kate has toured over 14 solo shows.
https://www.katesmurthwaite.co.uk

Other acts on the night:
Lily Phillips, is a fantastic comedian, one of the most exciting up and coming voices in comedy in the UK. She is a Runner Up at the 2019 Leicester Square New Comedian of the Year and Funny Women Finalist 2018, and was a part of prestigious Pleasance Comedy Reserve at the 2019 Edinburgh Fringe Festival.
https://www.lilyphillipscomedy.com

Kate Martin, a stand-up comedian who was made in the South but born in the North. Currently storming the clubs in London and beyond. Kate's experience in mental health gives fuel to her confident, high energy storytelling combined with razor sharp observations of life's quirks through queer eyes.
"Fresh faced lass with humour to match"......Lubna Kerr
https://www.mirthcontrolcomedy.com/katemartin

Josephine Lacey, has been described as ‘eloquently filthy’, delivering her material with an effortless charm and huge smile that leaves audiences loving her and wanting more. Drawing on her Jamaican-Irish heritage and life experience as a mother of an autistic child, she delivers her material with an honest humour and a natural raw energy.
https://www.facebook.com/AutismMamaandPuberty

Sally Firth, in short, smart, clever but most importantly funny, has performed all over the UK and is described as eminently likeable and the juxtaposition between content and delivery is a joy to watch (Ray Davis). 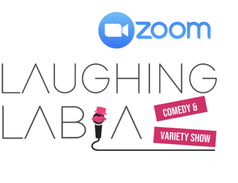 It has been a very difficult year for a lot of people and comedy is needed more than ever. Laughing Labia has moved to Zoom for the time being, we have done over 20 Laughing Labia Zoom shows, they are all for free to make them accessible for everyone and keep the spirits up with some laughter.

If you want to keep yourself entertain with some comedy outside of Zoom, here are Laughing Labia playlists:
Comedy in the Basement
Laughing Labia online
Sketches
Web-Series: "What the Frick"

Laughing Labia will be back in October as well!

on Sat, 17. Oct. from 4:00pm-6pm
in The Refreshment Rooms (25 Broadway, London E15 4BQ)
It's a free show, donations are welcomed - but please get your ticket here so we can keep track of all the numbers:
Online Tickets

We are back!!!! Laughing Labia ONLINE SHOWS

Laughing Labia is back - safer than ever! Our live show will be back in a new online format that you can watch from the safety of your own couch!

Working togehter with the Internationals Meetup we start our first event on Wed, 1. April 2020, followed by a show once every week!

Austrian, award-winning MC Alice Frick invites one guest each show. Together with another brilliant female comedian they will try to keep you entertained on your sofa. 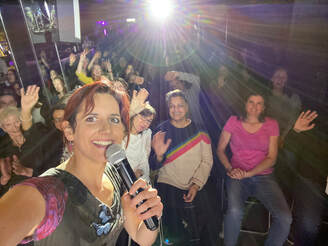 We are filming a Laughing Labia special for NextUp Comedy!  Sadly, this show will be postponed due to the corona virus crisis... BUT we will very likely film in October 2020! If you want to stay updated, here is the NEWSLETTER :)

At the Phoenix Artist Club in London Soho.

Laughing Labia is coming to Manchester!
On the 6. & 7. March 2020
Our line-up is packed with national and international award-winning comedy gems:

Tickets are available online for the Friday show: FRIDAY NIGHT
And here are the info for the Saturday show: SATURDAY NIGHT

We are on TripAdvisor

We are on trip advisor! Please write a review and help us to get more visibility! Here is the link: TripAdvisor.

We will be back for our x-mas special on Sunday, 1. December 2019. This show will be packed with funny women, hilarious comedy and variety acts.
Hosted by award-winning comedian Alice Frick

Doors open at 5:30 for a 6pm show (finishes at 8pm)
Get your tickets here: December Show - Online Tickets

We will be back one more time for before the summer. April is packed with stand-up, musical comedy, burlesque and poetry.
The comedians this month are:
Kate Smurthwaite, Katie Pritchard, Sikisa Bostwick-Barnes, Katrina Quinn, Spring Day, Bella Humphries, Holly May King
​Hosted by Alice Frick
Tickets are available here: Online Tickets

After a sold-out February show, tickets for our March show are already available online here.
We have another fantastic line-up with stand-up comedy, cabaret and a drag king.
Our acts this month: Lily Phillips, Lesley Kershaw, Sophie McKay, Barbara Brownskirt, Pauline Eyre, Loui von Dini
MC as always: Alice Frick and on the sound-deck Catherine Allin, co-host of our Laughing Labia podcast.
​

We will be back in February with fantastic female comedians and cabaret artist.
This month we have a mixture of stand-up comedy, musical comedy, character comedy and cabaret - a night filled with laughter.
Acts of this month are: Cecilia Delatori, Elf Lyons, Vanessa Hua, Rosie Wilby, Sandra Hale and Len Blanco

MC will be awardwinning Austrian comedian Alice Frick
(Doors open at 6:30 for a 7pm show)

We are very happy for our podcast special to celebrate our 5th season of Laughing Labia with a lot of amazing comedians. All 8 episoes are available on:
iTunes,
Soundcloud,
Spotify, etc. 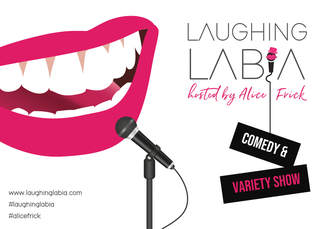 For our christmas special we have a cracking line up! The deluxe of the comedy and cabaret circus with a few christmas surprises.

Our Podcast "Party Goblin" is out now

The new episode of our podcast is out and can be found here:
Podcast Episode 2: What's your party goblin? 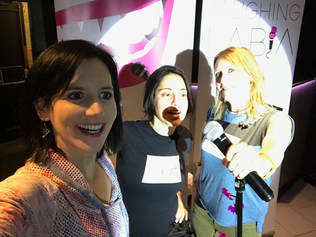 After a sold-out season opening we will be back with an amazing line-up on the 4. November 2018. 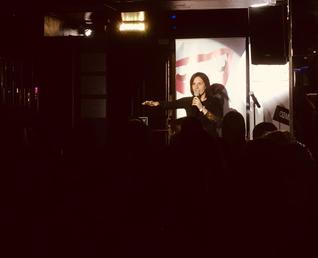 Laughing Labia will be back on the 7. October. After a sold-out last season we moved to a bigger venue in the heart of London Soho with a cracking line up.

After a sold-out season last year, we are very happy to announce that we will move to a bigger venue!
The venue is in the heart of Soho @ KU Bar Soho (30 Lisle St, London WC2H 7BA), 7pm - 9:15pm

Dates are now confirmed as well:


We are looking forward to another amazing season!

We are very happy to announce that Laughing Labia will be part of L-Fest 2018!

More info about the show and the festival can be found here.

Our acts of our 1. April - April Fools show are: 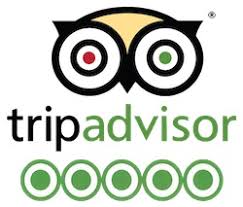 Our acts for our 4. March show are full of stand ups, poets and burlesque acts:

Our acts of the Valentin's show are:

Our acts of the Christmas show are: 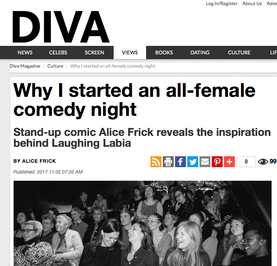 We are happy to be featured in the Diva Magazine.
​Please find the full article here: Diva Article online

After a sold out October show we are back in November with other fantastic female performers.

This month with a lovely guest MC, burlesque and magic legend Loretta von Dini who shares the stage with fantastic cabaret and comedy acts.

We are more than happy to announce the dates for our new season! 2017/18 we will be back on the first Sunday of each month with a fantastic line up of female cabaret and comedy acts!

After a great season with fantastic performers we are looking forward to our season finale!
We have a top mixture of hilarious acts waiting for you: Stand Up, Musical Comedy, Magic, Burlesque… get ready for a great night out with full of laughter!

Another amazing line up is coming up for the Laughing Labia show in March: 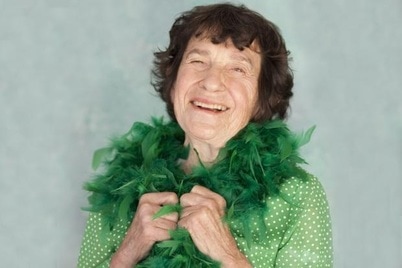 We have an amazing line up for you, with stand up comedy, burlesque, poetry - national and international ‪#‎ladytainers‬
On the bill are: Elf Lyons, Thanyia Moore, Heidi Regan​, Trudy Howson, Heidi von Swan, Madge Hooks with a lovely guest MC: Annabel Pribelszki!
​
We are very happy to have the oldest female comedian on the bill, Lynn Ruth Miller, recently appeared on Channel 4's First Dates.

Our last show was sold out - to make sure to get your ticket, buy it online here. 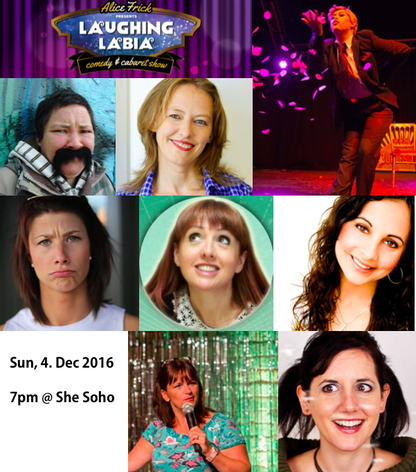 
We will be back on the 5. February 2017 with another brilliant line up, amongst others: Lynn Ruth Miller, the oldest female comedian who just recently appeared on Channel 4's First Dates. 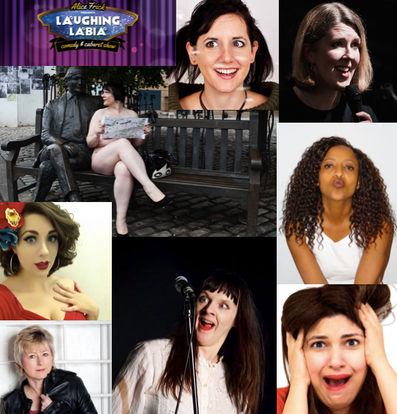 After a sold-out show in October, Laughing Labia is back on ​ 6. November 2016

This time we also have a brillaint line up with stand up comedians, clowns, burlesque performers and musical cabaret.
International and national funny women will guarantee a night of laughter. 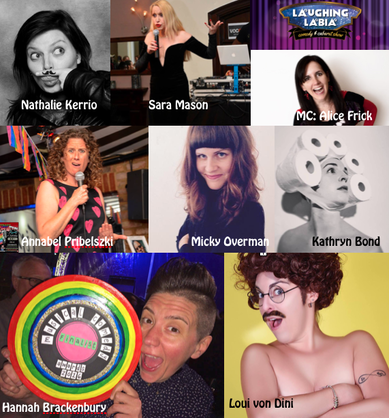 Laughing Labia will be back for another season!

​with an amazing line up, a mixture of comedy & cabaret artists!

May Show in London Soho 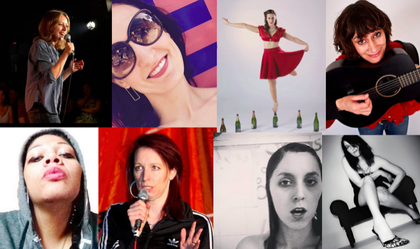 Laughing Labia is getting ready for the big relaunch!
Let the Ladies entertain you!

Laughing Labia will be part of the OBR Festival 2016

In February 2016 Laughing Labia will be part of the One Billion Rising Festival in London.

Our show is on Monday 8th February 2016, 8pm, doors open at 7pm (Tickets 10 pounds)
The festival will be from the 7th to 14th February 2016 at The Bread and Roses Theatre in Clapham, produced by Goblin Baby Theatre Co.

One Billion Rising is the biggest mass action to end violence against women in human history. The campaign, launched on Valentine’s Day 2012, began as a call to action based on the staggering statistic that 1 in 3 women on the planet will be beaten or raped during her lifetime. With the world population at 7 billion, this adds up to more than ONE BILLION WOMEN AND GIRLS. More information are on this website.